The bi-directional communication between the central nervous system and the gut is increasingly accepted and supported from a scientific point of view. In this article, we will explore the mechanisms behind this relationship.

As we learn more about our own biology, and the way that different ecosystems work in symbiosis in the human body, it is possible to establish new connections and explore potential therapeutic avenues. One of the areas of major focus has been the intestinal microbiota, which is the main reservoir of microorganisms in the human body.

How can the microbiota influence the brain?

We can say that what goes on in the gut does not stay there. The microorganisms that inhabit the gut, participate actively in the digestion process, helping us to produce and absorb certain nutrients a. The microbiota can influence the brain through the following ways:

And how does the brain influence the gut?

Probably, we have all felt the impact of our emotional state on digestion, in different ways. There is a neural network that directly coordinates the motility and secretory function of the gut – the enteric nervous system. In turn, this system receives inputs from the autonomic nervous system (sympathetic and parasympathetic) and from the hypothalamic-pituitary-adrenal axis (HPA), which controls the neurohormonal response to stress. Basically, there is a dense neural matrix that establishes the connection between what is processed in the brain and what happens in the gut.

This modulation focuses on the following functions:

All of these mechanisms are not limited and influence the microbiota in different ways, generating a cycle. For instance, in cases of hyperactivation of the HPA axis and the sympathetic branch of the ANS (autonomic nervous system), there is secretion of noradrenaline and other neurotransmitters in the gut, which in turn promotes the growth of certain bacteria. 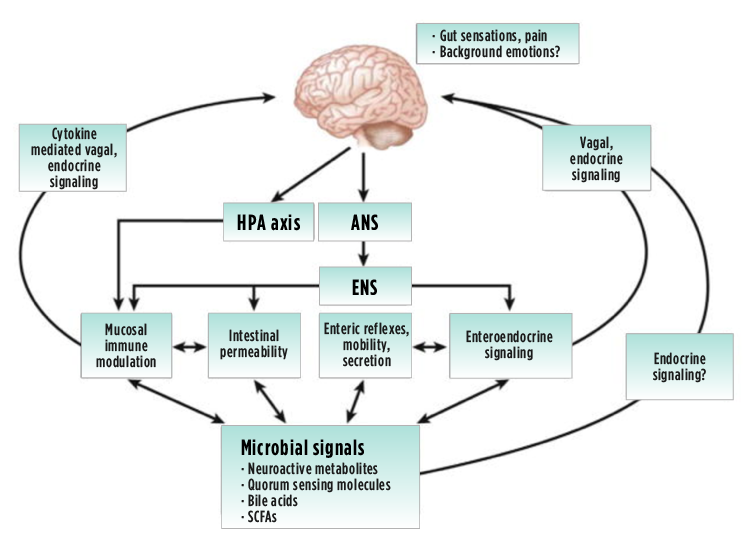 How does this relationship affect treatment?

Given this complex and bidirectional relationship, we can divide the available therapies according to their main target:

This category includes methods to mitigate any imbalances that may be contributing to intestinal dysregulation. These methods may be of pharmacological or other origin. One modality of particular interest is Gut-Directed-Hypnotherapy. In this type of intervention, the patient is guided to process sensory stimuli in a different way, in order to modulate the neurological response at the intestinal level. In a 2016 study, this approach was found to be as effective as the low-FODMAP diet in controlling symptoms of Irritable Bowel Syndrome (7). Gut-Directed-Hypnotherapy does not seem to significantly affect the intestinal microbiota, which suggests a different mechanism of action (8).

This includes substances commonly used in the treatment of functional gastrointestinal disorders, which act mainly on motility and secretory activity. There are pharmacological and natural alternatives, such as peppermint extract, which has an anti-spasmodic activity and is mentioned in the latest guidelines of the American College of Gastroenterology, for the treatment of Irritable Bowel Syndrome (9).

It is possible to achieve good clinical results in functional diseases of the gastrointestinal tract through modulation of the microbiota. There are several ways to “adjust” the microbiota:

In this brief article, we can attest to how complex the interrelationship between the brain and the gut is, and the way they affect each other. These associations make the understanding less linear, but, at the same time, open new possibilities for complementary clinical interventions.